LET US RING OUT PEACE TO THE WORLD

A warm greeting, peace and good!

Eight hundred years ago, Francis of Assisi and Sultan Al-Kamil of Egypt met. Francis went to the holy land and in a strong gesture of dialogue, he arrived in Egypt for a very special meeting.

Two strangers met in peace, with one breath and heartbeat before God. One was and remained Christian, the other was and remained Muslim. The meeting had a profound effect, particularly on Saint Francis.
He had felt a relationship of faith with a brother and was impressed by their call to prayer that sounded through the city and region.
Shortly thereafter he wrote a letter to the city administrators and the custodians, to also make a call for prayer.

On Friday October 4, 2019 at 2.00 pm we would like to sound the bells worldwide.
On this feast day, the anniversary of the death of Francis of Assisi,
at the time of Friday prayer,
to make Francis’ longing come true
to remember that important meeting between Francis and the Sultan,
to pray together for peace in solidarity with our Muslim brothers & sisters.

We also invite everyone to go literally to “the other” in the footsteps of saint Francis, in fraternity. Visit your neighbor of different faith, meet the imam of the local mosque, …

We hope that we can count on your support to help carry this initiative, to have your bell(s), … ring in your towers, belfries, carillon, churches, communities, institutions – a call or another sign – on Friday 4 October 2019 at 14.00 hrs. to give a hopeful sign of prayer, peace and reconciliation among all people of goodwill throughout the world.

This peace call is initiated by the franciscan family in Belgium and the Netherlands and is supported by the Belgian Bischopconference, Pax Christi Vlaanderen and Orbit vzw. 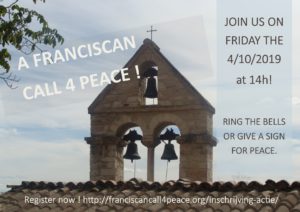